In response to the rising number of cases in Labuan, the Government has announced that the federal territory will be placed under a Conditional Movement Control Order (CMCO) for two weeks beginning October 17 until October 30.

Under CMCO, interstate travel is not permitted. However, transport bringing workers to the island as well as emergency cases are allowed, where the letter of approval from the police is required.

However, the public is advised to remain calm as economic activities and businesses on Labuan may continue their operations, provided all the SOPs as stipulated by the Government are adhered to.

Additionally, mosques and suraus are allowed to hold daily and Friday prayers, but the condition will be brought to the Islamic authorities for the approval of the Yang di-Pertuan Agong.

Further details on the SOP will be announced by the Government soon.

The Government has also informed the public that travel permits for entry and exit at designated CMCO areas can now be obtained at police stations or downloaded directly from the police’s official Facebook page.

The travel permits will allow the public with the necessary requirement to pass through roadblocks in and out of CMCO areas. Applicants need to fill up the forms and obtain the signature of the station chief at any police station.

Clarifying the rule on dining in public, the National Security Council now allows a maximum of four diners per table, instead of two, provided that the table is big enough to allow for sufficient distancing. Commenting on the same issue, the Selangor Menteri Besar announced that eateries in Selangor will now be allowed to host a maximum of five diners per table during CMCO, with the same condition that there is enough space to observe physical distancing.

The CMCO enforced in Kuala Lumpur, Selangor and Putrajaya is currently in effect, from October 14 until October 27.

The Ministry of Tourism, Arts and Culture has released the detailed SOPs during CMCO in the three areas related to the tourism industry which can be viewed in full here: FAQ on the Tourism and Cultural Sector during CMCO.

Yesterday, Malaysia celebrated the recoveries of 409 patients, the highest recorded number of recovery cases in a day. However, the Ministry of Health also announced 589 new cases of Covid-19, bringing the total cases in the country to 18,129. 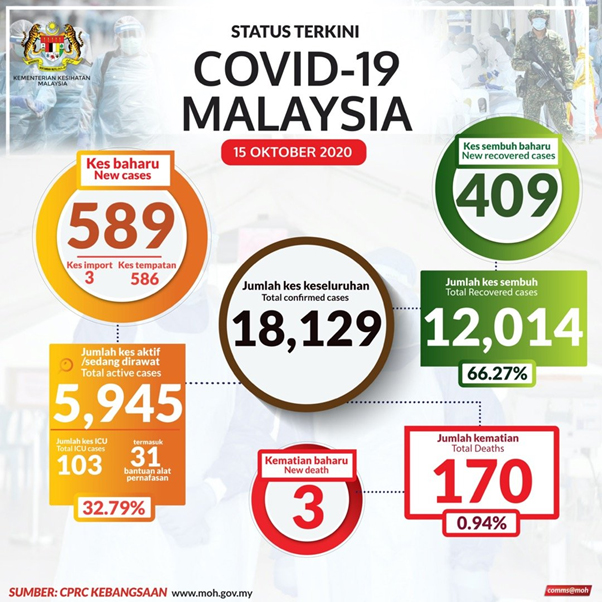