Due to the spike in Covid-19 cases from the Kaya Cluster located in Negeri Sembilan and Putrajaya which involved MAB Kargo Employees, the government decided to implement an isolation programme for all 360 MAB Kargo employees in KLIA for the two-week period.

Even though the employees show no symptoms of Covid-19 and have been confirmed negative, the programme was introduced to reduce the risk of infection to other communities. The employees will be placed at the Tune Hotel KLIA Aeropolis and will be closely monitored by the Ministry of Health (MoH), the National Security Council and the police.

The Senior Minister had also announced Enhanced Movement Control Order (EMCO) in several housing estates in Mukim Sungai Seluang in Kulim, Kedah. The EMCO will take into effect in this locality for 14 days from November 27 until December 10. The EMCO is estimated to affect 6,000 residents.

The residents in the listed areas must abide by the rules and the set standard operating procedure (SOP) under EMCO. This includes restriction from leaving the area (except for emergency cases) and the closure of schools, mosques and other houses of worship.

In the same announcement, the Senior Minister named another area where EMCO will be implemented namely the Taman Telipok Ria in Tuaran, Sabah. The EMCO will begin from November 27 until December 10 and would affect 18,000 residents in the area.

Meanwhile, the EMCO in Kampung Pengaraban, Kampung Tanjung Kapor and Kampung Landung Ayang in Kudat, Sabah had ended as scheduled on November 26 as the Covid-19 situation in these localities had shown a downtrend and are under control.

With 2,555 patients discharged, active cases in Malaysia have decreased to 11,348 cases. Out of the total 60,752 cases reported in Malaysia, 49,056 patients had recovered and had been discharged.

While the numbers bear positive signs, let us maintain our efforts in helping to curb the spread of the pandemic within our shores. 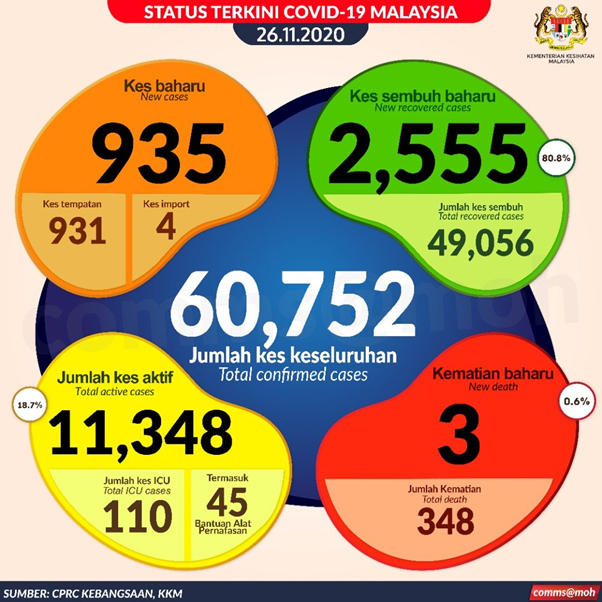