The Conditional Movement Control Order (CMCO) enforced in Kuala Lumpur, Selangor and Putrajaya will now be extended for another two weeks until November 9 with Standard Operating Procedures (SOP) remains.

Our government has also announced that the state-wide CMCO in Sabah, to be extended to November 9 previously.

Meanwhile, due to the rising number of COVID-19 cases among foreigners, the whole district of Nilai in Negeri Sembilan will observe CMCO from October 28 to November 10, with Putra Point, Nilai will go under Enhanced Movement Control Order (EMCO).

Besides, two more areas in Selangor - Flat Sungai Emas (Kuala Langat) and Plaza Hentian Kajang (Hulu Langat) will also be placed under EMCO for the same period, following a recommendation from the Health Ministry.

According to our Health director-general Tan Sri Dr Noor Hisham Abdullah, 30 per cent of 230 COVID-19 clusters detected in the country since March are linked to the workplace, and thus urging proactive measures taken by employers in curbing the pandemic.

So far, the implementation of CMCO, EMCO as well as Targeted Enhanced Movement Control Order (TEMCO) has seen some improvement with no exponential surge recorded. But the new cases are consistently increasing every day.

Our government, as well as the healthcare system, manages to cope with the COVID-19 situation in Sabah, although bed occupancy rate in hospitals is high. Even our Prime Minister, Tan Sri Muhyiddin Yassin has also ordered the control and capability of public health in Sabah to be enhanced immediately in stemming the pandemic. 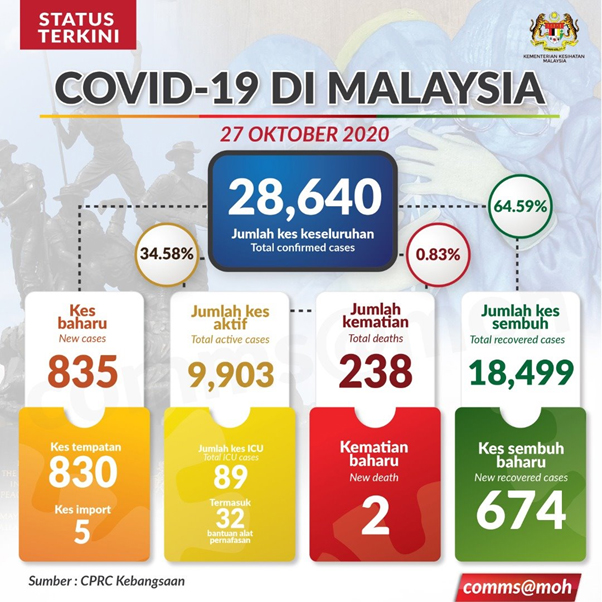